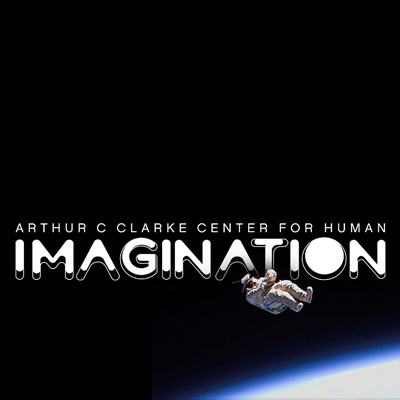 Your contributions will help one of the Arthur C. Clark research groups called "The Imaginarium" which focuses on creating positive feedback loops in the mechanism of imagination.The Imaginarium integrates research from neuroscience, cognitive science, medicine, and the arts and is supported in part by the National Science Foundation. Benefund the Arthur C. Clarke Center to fund research that fuels innovation!

Exploring the basis of human imagination

To become more effective at harnessing the strengths associated with imagination, the Arthur C. Clarke Center interconnects leading-edge innovators in academia and industry to develop novel solutions for 21st Century needs. The Arthur C. Clark Center synergize perspectives from the sciences, arts, humanities, engineering, and medicine to provide a new theoretical framework for exploring the basis of imagination.

Fortunately, the center is at the cusp of new insights. Advances in neuroscience, cognition, behavioral science, and psychology shed light from one angle, while the creations of authors, artists, and musicians illuminate another.

The human imagination is the ultimate catalyst for innovation. To sustain the exponential growth of technology, The Arthur C. Clark Center researches imagination to extract powerful insights that can unlock the formula for groundbreaking advancements in technology, society, and culture.

The Arthur C. Clarke Foundation was established in 1983 in Washington, D.C., as part of World Communications Year celebrations at the United Nations, an international event sponsored by the United Nation's International Telecommunication Union (ITU). The Foundation was created to recognize and promote the extraordinary contributions of Arthur C. Clarke to the world, and to promote the use of space and telecommunications technology for the benefit of humankind.

The Foundation is dedicated to building on Sir Arthur Clarke's multidisciplinary and inspiring legacy. The Foundation draws its inspiration and activities from Sir Arthur's wide range of visionary, creative and constructive imagination. At one extreme is Clarke the physicist who, at age 28, envisioned a future where geosynchronous platforms --extra-terrestrial relays-- could be used for global communication. At the other, is Clarke as a visionary humanist and one of the most inspiring and entertaining science fiction writers of all time. His relentless and profound faith in humanity's ability to meet the challenges of sustaining our planet and at the same time inspiring us to elevate our imaginations and horizons to the unknown.

Arthur C. Clarke was known not only for his science fiction novels such as Childhood's End, Rendezvous with Rama, and 2001: A Space Odyssey, but also for his scientific publications on space, energy, and the oceans. He is perhaps most famous for envisioning a global network of geosynchronous telecommunications satellites in 1945, developing low altitude radar, conceptualizing the "space elevator" (an elevator from Earth's surface to orbit), and ocean thermal energy conversion (OTEC).

The work of the Foundation is to continue and recognize the seminal works and ideas of one of the leading thinkers and more extensive writers of science fiction and science fact of the 20th century.