Solutions in the Sea | Benefunder
Skip to main content 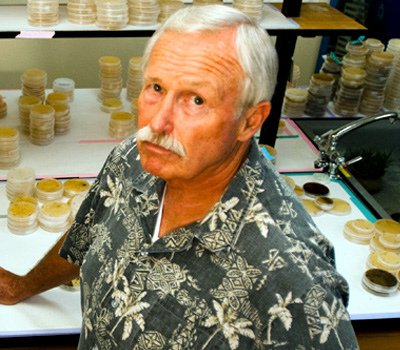 Your donations replace government and pharmaceutical funding for research which is rapidly dwindling. With four drugs currently in development, Dr. Fenical seeks support for the development of a current drug candidate for melanoma and to expand this work in the area of neurodegenerative diseases. This program offers new treatments for the most dangerous of contemporary diseases.

Exploring the oceans for cures to treat cancer and infectious diseases

The oceans offer enormous promise in the treatment of human disease.  As the need for new drugs increases, we need to turn to the oceans as our most expansive untapped natural resource.  Dr. Fenical and his work at the Center for Marine Biotechnology and Biomedicine has already impacted cancer patients by delivering cures in at least one cancer (cutaneous marginal zone lymphoma) and current work promises to impact other cancers such as melanoma.  Our work in infectious diseases, specifically with MRSA infections (methicillin-resistant Staphylococcus aureus) has provided clear evidence that new marine antibiotics will be discovered to provide effective treatment for drug resistant infections.  Dr. Fenical's research provides clear societal impact, contributes to commercial development, and contributes promising academic discoveries.

The oceans are our last great frontier for biomedical discovery. This program is unique on a world-wide level and growing as Dr. Fenical and his team demonstrate how prolific marine biomedical research can be. Dr. Fenical's vision is that we continue to expand on the number of discoveries from the ocean for 21st century medicine and that we continue to inspire and excite the next generation of researchers to continue to build upon our research to discover breakthrough treatments.

Dr. Fenical first became excited about the ocean at the age of 12 while on a family trip to Florida. Not long after, he and his family moved from their Chicago home to California.

Determined to blend his love of the ocean with his career, Bill attained an Assistant Research Chemist position at Scripps in 1973. Since that time Bill has studied marine chemical ecology with particular interest in the role of chemical defense in thwarting predation on vulnerable marine organisms. It is from this research, and the resultant discovery of new chemical compounds, that Bill became interested in the medical potential of the oceans.

Today his research focuses on the discovery of medicinally valuable compounds derived from marine microorganisms collected locally and in tropical locations, as well as extreme environments such as the deep-sea and arctic waters.

In support of this research Bill has traveled the world performing field collections using SCUBA. He is one of the few to have successfully combined his hobby with his career. An avid fisherman, Bill vacations in Baja where he keeps a boat.

Bill has worked tirelessly as an educator and mentor, supervising 42 graduate students and 71 post-doctoral fellows. He is also an avid field researcher and diver, a fact made clear by his participation in 36 worldwide research expeditions, including 30 as chief scientist.

To Scripps researcher Bill Fenical, the oceans are a tantalizing trove of potential anti-cancer drugs. It's all about the chemistry, he says

The Story Behind the Anthrax Killer

Novel Antibiotic Discovered in the Ocean