How Can We Better Treat Vascular Inflammation in Diabetes? 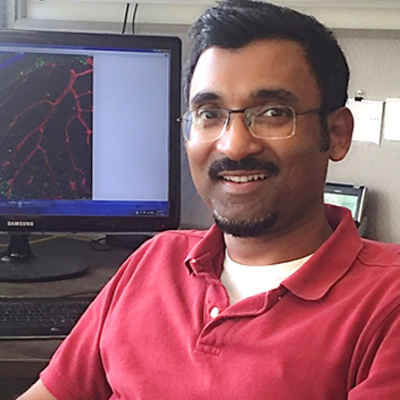 Your contributions will support the continued research of Dr. Ghosh at the University of California, Riverside, as he explores novel ways to treat vascular inflammation in diabetic patients. Funding will support the annual budget of $350K required for postdoctoral fellows, students, reagents, animals, consumables, core services, and equipment. By providing this support, you will accelerate the pace of his basic and translational research, leading to immediate and large-scale applications in medicine.

Integrating the principles of physics, biology, and nanotechnology to combat chronic vascular inflammation associated with diabetic retinopathy and cardiovascular diseases

In the age of technology, we now enter an era in which diabetes is a rapidly increasing global epidemic. As a result, chronic vascular inflammation—a common feature and major determinant of many diabetic complications such as retinopathy and cardiovascular diseases—is escalating. By further understanding how chronic vascular inflammation occurs, Dr. Kaustabh Ghosh, Assistant Professor of the Department of Bioengineering at University of California, Riverside is developing new therapies so that the ever-expanding population of diabetics may have a better chance at living a quality life, without the debilitating effects of chronic vascular inflammation.

Common anti-inflammatory therapies used to treat diabetic complications, such as retinopathy (which leads to vision loss) and cardiovascular diseases, exhibit serious adverse effects, which include nausea, liver and kidney damage, and cataract formation. To address the lack of effective anti-inflammatory therapies currently on the market, Dr. Ghosh and his team are identifying a new class of molecular targets and developing superior nanotherapeutics that have minimal to no side effects.

Thus, in essence, Dr Ghosh’s research shows that the stiffness of blood vessels alone can dictate vascular response to high blood glucose, that is, whether it will undergo inflammation or not, in much the same way that the tension (stiffness) of guitar strings (which is controlled by tuning knobs) alone can dictate the tune produced by the same set of strings and strokes.

Intellectual curiosity, a hunger for creative freedom, and the desire to understand and discover new concepts motivated Dr. Ghosh to pursue a career in scientific research, and he has been the Assistant Professor in the Department of Bioengineering at University of California, Riverside since 2011. Earlier in his professional career, he was a postdoctoral research fellow in the Vascular Biology Program at Boston Children’s Hospital and Harvard Medical School. After receiving extensive and multidisciplinary training in the fields of vascular mechanobiology, bioengineering and nanomedicine, Dr. Ghosh began his independent research career to study the often overlooked role of blood vessel stiffness in chronic vascular inflammation.

His interest in vascular inflammation research stems from his knowledge of its role as a chief characteristic and a major determinant of most, if not all, debilitating and prevalent conditions, such as diabetic retinopathy, cardiovascular diseases and age-related vision loss. Though vascular inflammation has long been studied, not a lot of progress has been made in its treatment. So Dr. Ghosh asked himself, “What is missing from the picture and how can we better address it?”

With a multidisciplinary background, he was convinced he could make a difference in treating this condition. He knew that changes in the mechanical properties of tissues—namely its stiffness—contribute to many pathologies. He therefore wondered whether increased stiffness of blood vessels, which is often correlated with chronic vascular inflammation, could also play a causative role in this condition. Coupled with his nanomedicine research background, Dr. Ghosh knew he could develop an excellent delivery method for getting drugs directly to the target site and prevent local vascular stiffening and inflammation. Through his continued research, he aims to identify novel anti-inflammatory targets as well as use nanotechnological approaches to amplify the therapeutic effects of existing treatment so that a patient can be treated with the current working drugs with minimal to no adverse off-target effects.

Application No. 62/188,474:  “Nanoliposomal Nitroglycerin Preparations, Methods of Making and Use Thereof”.