How Can We Make Interference in Communication Networks Useful? 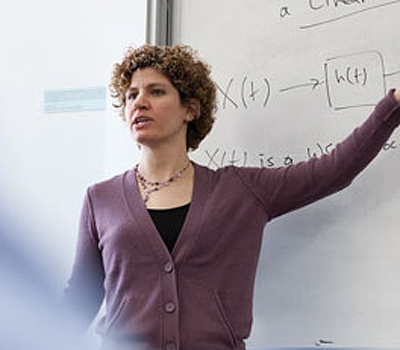 Dr. Erkip's work is highly theoretical; your contributions will be directed toward funding travel expenses, which enable her to attend conferences to network and interact with collaborators around the country. Funding will also cover staffing, required personnel include graduate and postdoctoral students that understand the practice of directly designing working models.

There are nearly as many activated cell phones in the world as there are people, and they are all competing for access to the same networks. Dr. Elza Erkip is researching ways to utilize the multitude of available frequencies presented by millimeter wave networks for next (5th) generation wireless technologies using the most energy-efficient methods possible. Information theory very successfully identifies the essential features of a communication system and provides a theoretical foundation for practical system design. This research allows Dr. Erkip to understand the cornerstone concepts for building a communication system by asking deep and fundamental questions. As an increasing amount of communication takes place through wirelessly-connected devices, redesigning the way they connect to networks will allow for more efficient signal transmission that uses less of the device's power.

In any communication network, multiple users send electrical signals that interact during the communication from the device to the base station. All of these signals interfere with one another, which typically congest networks, eliminating the hope of a clean channel between device and base station. Dr. Elza Erkip, professor of electrical and computer engineering at New York University Polytechnic School of Engineering is researching wireless communication and the interaction between electrical signals. Her research aims to understand how multiple users interact, compete, and cooperate in communication networks. These three features are an essential part of any communication system, from cellular networks to cloud computing. She is hoping to provide a fundamental understanding of how such networks should be designed and operated, all while maintaining an energy-efficiency focus.

In current systems, wireless signals are being emitted from devices in all directions in the hopes of connecting to an access point, be it a smaller station or a raised base station tower. In this process, a signal is sent from a device to a base station, and that communication is then wired through the backbone network to the target device. All of the signals sent through the same frequency are competing for access to the base station, so Dr. Erkip's current research is designing ways to improve system efficiency.

Dr. Erkip has two older brothers who both hold doctorate degrees. She looks up to these older role models, who made her doctorate pursuits seem like a noble path and natural for her to follow. Her interest in mathematics, and in anything related to problem solving and mathematical thinking concepts, began when she was a young girl. She strove for excellence above and beyond what she learned in school, wanting to understand more about how different mathematical concepts relate and combine with one another. Dr. Erkip also holds a love for academia in general; she enjoys being with smart and curious people and pursuing intellectual interests in an encouraging setting. While in school, she used her intellect to hold tutoring sessions with her friends. In college, 10-15 of her friends would meet with Dr. Erkip to review concepts under her direction, and these sessions reinforced her desire to not only pursue research, but also an academic setting. She enjoys the personal interactions this type of work provides, but also the process of explaining and teaching.

Initially, it seemed logical to Dr. Erkip to become a mathematician, but once she realized that engineering, in particular electrical engineering, gave her the right balance of theory and application, a need for change became apparent. Dr. Erkip received her  B.S. degree in Electrical and Electronic Engineering from Middle East Technical University in Ankara, Turkey, and her M.S. and Ph.D. degrees in Electrical Engineering from Stanford University. Currently, she is a Professor of Electrical and Computer Engineering at New York University Polytechnic School of Engineering. Her research interests are in information theory, communication theory and wireless communications.

Searching for 1,000 times the capacity of 4G wireless

Award for Advances in Communication, 2013