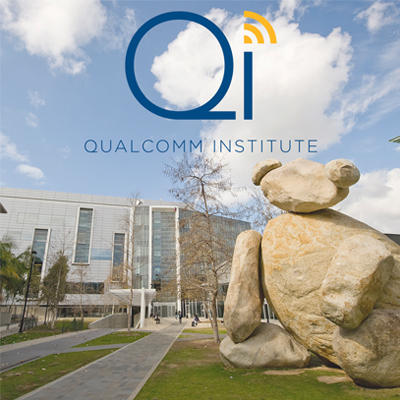 Your contributions will support the interdisciplinary work of the Qualcomm Institute at UC San Diego as well as enable technologies in fields including robotics, design, and brain science. Your donations will help fund the roughly $1.6M per year in support (currently allotted to 35 projects) required to sustain many talented individuals, equipment and devices. Be part of this unique and powerful endeavor, fueling innovation in the global economy!

When bright individuals from different backgrounds, skills, and disciplines are free to explore and learn from each other, magic starts to happen and concepts turn into reality. Case in point: the Qualcomm Institute at UC San Diego, which brings together the strengths of 350 faculty and senior researchers who are free to collaborate and interact in ways that were previously unthinkable because of the traditional silos of academic departments. The institute, created in 2000, has forged new ways to undertake research on the university campus, allowing researchers and students from widely varying fields to occupy neighboring desks, offices and research neighborhoods. The ensuing interactions and chance encounters have produced long-term research alliances bringing together artists and physicists, electrical engineers and musicians, archaeologists and computer scientists, and many more unlikely and serendipitous collaborations.

Under Director Ramesh Rao, a professor of electrical and computer engineering at UC San Diego, the Qualcomm Institute has fostered a multidisciplinary environment where researchers and students alike are encouraged to think freely, collaborate closely, and overcome obstacles to succeed. “A strange, mysteriously fascinating place,” is how he explains it. “Ever diffuse and all-encompassing, the Qualcomm Institute cultivates a free-spirit that places interdisciplinary research at the heart of its vision, where people can deepen their ‘love affair’ with their interests and passions, by combining partially incomplete efforts to complete a single vision,” says Rao. “They can develop theory into practice and test new solutions for real-life applications. Alongside the “structured” public university that focuses on research and education, the Qualcomm Institute provides an “unstructured” outlet for accelerating results and increasing product development.”

Current areas of research include these four primary applications:

Calit2’s Qualcomm Institute is taking ideas beyond theory into practice, accelerating innovation and shortening the time between product development and job creation. Where the university traditionally has focused on education and research, the institute (and its sister division at UC Irvine) extends that focus to include development and deployment of prototype infrastructure for testing new solutions in a real-world context.

The Qualcomm Institute is in a unique position to be able to connect people across a broad range of research and development areas. The institute focuses on topics spanning informational technology, network architecture, wireless communications, and signal processing, but it is much more than just an engineering organization, and those “unconventional methods” have underscored the serendipity of researchers from varying fields becoming collaborators after finding themselves as neighbors in Atkinson Hall, the institute’s headquarters building.

Ultimately, the institute frequently finds itself in demand to help other departments on campus to use technology in a  new way. Case in point: one of the functions of the Vice Chancellor’s Office is taking care of research mice on campus, and the high costs of the water, food and “dorms” that cost 15 cents per mouse per night in UCSD labs. Dr. Rao brought together the animal welfare officials with a young computer scientist who was an expert in computer vision. The result: creation of a modern mouse dorm that could be monitored 24/7 with cameras, which could in turn track the movements of mice to determine their health or visible reactions to environmental conditions. The team was able to create a system that facilitated viewing and stabilized animal welfare at a lower cost. To this day, the Qualcomm Institute continues to undertake projects with strong real-life implications, bringing scientists of many fields together.

The Qualcomm Institute represents an experiment in inventing the university research environment of the future to continue to fuel innovation in the global economy. It:

•    Builds horizontal links among departments to foster multidisciplinary studies
•    Creates research teams consisting of members who can be located anywhere because of the Internet
•    Supports involvement by faculty, students, industry, government, and community partners
•    Enables prototyping in "living laboratories"
•    Provides technical professionals as the bridge between academia and industry