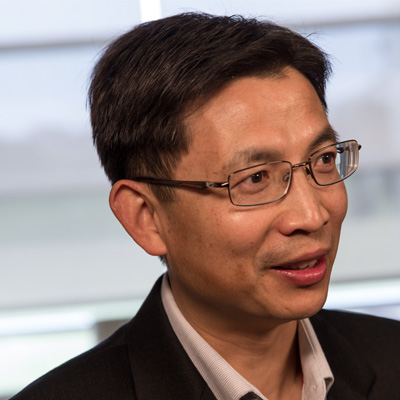 Your donations will support Dr. Chen's groundbreaking research, allowing his laboratory to continue to experiment with 3-D printing and its applications for regenerative medicine. This research will revolutionize the medical industry; allowing pharmaceutical companies to test products on 3-D tissue before investing additional funds in developing clinically viable drugs.

Dr. Shaochen Chen is pushing the frontiers of 3-D printing into phenomenally new territory. For the past few years, large companies with vast R&D resources - like Boeing, GE, and Honeywell - have all begun to manufacture some of their parts using this new technique. Dr. Chen, however, is going one step further by printing biomaterials such as functional human tissue. His laboratory, made up of a small team of researchers at UCSD, is directing its attention towards nanomaterials, bioprinting, and tissue engineering in pursuit of a future where materials printed in 3-D can heal wounds, repair damage caused by heart attacks, and make organs for organ replacement.

Dr. Shaochen Chen believes that we are not far away from growing functional organs. His technology is the fastest 3-D printing in the research world. His work is leading the way in creating applications for tissue engineering, regenerative medicine.

Before joining University of California, San Diego, Dr. Chen had been a professor and a Pearlie D. Henderson Centennial Endowed Faculty Fellow in Engineering in the Mechanical Engineering Department at the University of Texas at Austin. From 2008 to 2010, Dr. Chen served as the Program Director for the Nanomanufacturing Program in the National Science Foundation.

Dr. Chen has an excellent track record for developing well-funded research programs with funding from NIH, NSF, ONR, AFOSR, American Heart Association, Texas Instruments, Intel, and IBM. His group has published over 150 peer-reviewed publications and filed more than 15 patents/provisional patents. Three of the patents were licensed to CardioSpectra, Inc. and later acquired by Volcano Corporation (NASDAQ:VOLC) with $25M in cash.

Among his numerous awards, Dr. Chen received the CAREER award from NSF in 2001 for cutting-edge research in laser nanoscale processing of biodegradable polymers. This work is leading to the development of degradable polymeric micro- and nano-devices for cellular and molecular therapeutics. In 2004, Dr. Chen received the Young Investigator award from the Office of Naval Research (ONR) for his work on 3D printing of nanocomposites with unique optical, thermal, and chemical properties. His lab has developed innovative three-dimensional, multi-functional micro and nanostructures with a gradient of material composition and topography, leading to applications for tissue engineering and regenerative medicine. His work has been reported by Yahoo News, CNBC News, The Economic Times, R & D Magazine, ScienceDaily, Stem Cell Research, and Health Wire.

As an active member in his professional community, Dr. Chen is an elected Fellow of the American Association for the Advancement of Science (AAAS), Fellow of the International Society for Optical Engineering (SPIE), and Fellow of the American Society of Mechanical Engineers (ASME). He served as the Associate Editor for Journal of Biomedical Nanotechnology and ASME Journal of Manufacturing Science and Engineering. He is also on the editorial board of journals including Nanomedicine, Biofabrication, and Additive Manufacturing.

3D printing makes its mark on healthcare in Finland and beyond

How 3D Printers Are Reshaping Medicine

Printing off a kidney or another human organ may sound like something out of a science fiction novel, but with the advancements in 3D printing technology, the idea may not be so far-fetched

Nanoengineers at the University of California, San Diego have recently developed technology that could one day make 3D printing of organs possible, creating a major breakthrough in regenerative medicine

Biological Tissues from a Printer

Fellow, American Association for the Advancement of Science (AAAS), 2011

Outstanding Faculty Award from the College of Engineering, 2005