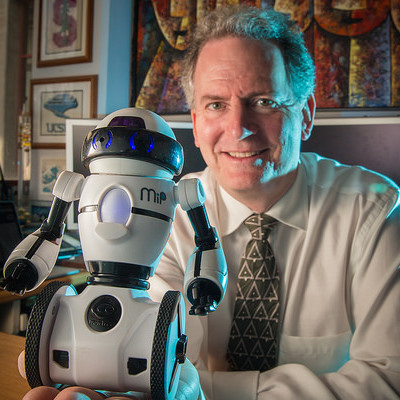 Contributions will support the research of Prof. Bewley’s team at UCSD, as they merge fluid dynamics, high-performance computing, control theory, and robotics. Get involved today! Donations of any size are welcomed. Donations of $100K per year for multiple years will establish anonymous or named fellowships administered by Prof. Bewley (e.g., the John & Jane Doe Graduate Fellowship in Coordinated Robotics), and will make a substantial impact on the scientific and educational projects of the lab.

Democratizing modern robotics for the enjoyment and betterment of mankind

Imagine a swarm of hundreds of small smart sensor balloons, robustly built leveraging inexpensive cellphone technology, that can (a) be released into a hurricane as it begins to form, (b) self-distribute over the hurricane in an energetically-efficient manner, (c) report measurements back to hurricane forecasting centers as the hurricane develops, and (d) move with the hurricane as it evolves over several days, all the way until landfall. The energetically-efficient balloons steer using buoyancy control only, just like hot air balloons, leveraging the strong vertical stratification of the winds. The continuous monitoring of the storm by such balloons can radically improve the accuracy with which meteorologists can predict the evolving storm track and intensity, thus providing a crucial extra couple of days to move people out of harm’s way when the next Katrina or Sandy threatens. Similarly, imagine a squad of small sensor-laden unmanned aerial vehicles (UAVs) deployed into a dangerous plume of ash from a volcano, or into a radioactive cloud from a nuclear incident, and commanded to fly optimally within and around the plume to minimize the uncertainty of the plume’s current location as well as its future evolution - again, to keep people out of harm’s way. Sound like science fiction? Researchers in Prof. Bewley’s Flow Control & Coordinated Robotics Labs at UCSD are hard at work making such novel applications of robotics a reality, realizing the promise of today’s remarkable cellphone technology, high-performance “cloud computing” capabilities, and global communication infrastructure.

Integrated with Prof. Bewley’s research is his passion for inspiring young minds to pursue careers in science and technology. Sole author of the forthcoming comprehensive textbook Numerical Renaissance: simulation, optimization, & control, Prof. Bewley envisions a world in which advanced interdisciplinary thinking is commonplace, and cutting-edge robotics technology (e.g., cellphone electronics and software, 3D design and 3D printing, and advanced vision-based distributed coordination algorithms) is democratized, accessible, and appropriately regulated, providing countless benefits to humanity: efficient farming, clean water, secure infrastructure and borders, accurate prediction and efficient response to environmental threats, etc. In short, efficiently using machines in those jobs that are dull, dirty, and dangerous, or otherwise simply impossible, while respecting individual privacy. Prof. Bewley’s lab develops robotic vehicles not only as engineering solutions to such overarching applications, but also as inspiring instruments of education. Core to this is his lab’s close partnership with WowWee Robotics and their ongoing joint development of a line of consumer and educational robotic toys designed to engage K-12 students with technology, math, and physics. The first in this line, dubbed MiP, is a small Segway-like balancing robotic vehicle that organically demonstrates the magic of feedback control. Prof. Bewley’s team is busy developing similar robotic toys, such as a new vehicle with unmatched skills at dancing and designed specifically to inspire girls towards technological careers in a fun and engaging manner. Ultimately, he hopes to spin off his popular fall-quarter capstone course at UCSD, in Embedded Control & Robotics, as a Massively Open Online Course (MOOC) in which students around the world can learn to connect their physical and cyber worlds in an effective and inexpensive manner.

Dr. Thomas Bewley is a Professor of Mechanical and Aerospace Engineering at University of California, San Diego. Born and raised in a small rural community near Mount Rainier, he received his B.S. and M.S. from Caltech, a diploma from 1-year course at the von Karman Institute for Fluid Dynamics (VKI) in Belgium, and his Ph.D. from Stanford. Between VKI and Stanford, he also served as an officer and pilot in the US Air Force. Prof. Bewley’s academic start was on the theoretical end, in high-performance computing, control theory, turbulence, and Navier-Stokes mathematics. The concept for the first robotics project developed by his team, which eventually evolved into MiP in close collaboration with WowWee Robotics, was proposed in a final exam written by Prof. Bewley in 2004. When MiP finally reached the market in 2014, it was instantly a breakout success. It will be followed by a series of robotic vehicles that will inspire and educate. Prof. Bewley recounts, “When watching my three year old play with MiP on Christmas morning in December, 2014, I realized that, literally, hundreds of thousands of children were opening up a robotic toy that morning that was originally conceived and designed in my lab. With that sort of reach comes great responsibility. I truly believe that the democratization of technology in general, and robotics in particular, will substantially improve the human condition throughout the world. Our lab is in a unique position to make a substantial impact on this transformation, reminding system designers, technology developers, and government regulators of the numerous impacts that such technology can make on our everyday lives, while shedding light on the amazing benefits to society that it can bring.”

The behind the scene story of MiP, the engaging balancing robot

Presented by Prof Bewley at the CONNECT Frontiers In Science and Technology event on Feb 27, 2014, in San Diego, CA.

UCSD Coordinated Robotics: from ideation, to prototype, to IP, to market

Presented by Prof Bewley at the EvoNexus headliner event San Diego: The Hub For The New Age Of Robotic Innovation on Aug 12, 2014, at Qualcomm headquarters